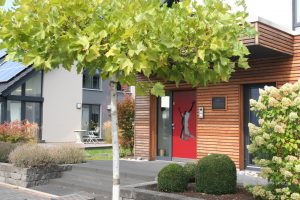 42279 Wuppertal: The exhibition with 19 show houses in the "Efficiency House Plus" building standard on the 18,000 square meter site is a model project of the prefabricated construction industry for the development of energy-efficient settlements, sponsored by the BBSR. All model houses are networked with each other and have a central storage battery so that energy can be generated, stored and distributed collectively. Completion: 2013

Energy
With the help of photovoltaic systems, the houses generate more energy than their residents would consume. The entire neighborhood remains connected to the public power grid, to which energy can be supplied or drawn from as needed. Sensors in the houses measure the energy flows. The Fraunhofer Institute for Building Physics is conducting scientific monitoring to compare the different degrees of self-use and self-sufficiency of various storage concepts. The project is funded by the Federal Ministry of Building, represented by the Federal Institute for Research on Building, Urban Affairs and Spatial Development (BBSR).

Photovoltaic systems
The solar power generation of the buildings is realized with different photovoltaic modules, which are mainly designed as rooftop installations. In the process, 37 percent of the solar cells are made of monocrystalline silicon and 58 percent of polycrystalline silicon. In one project, CIS (copper indium diselenide) solar cells are integrated into the facade. A total of 175.9 kWp PV systems were installed. 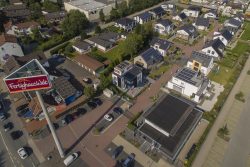 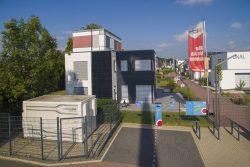 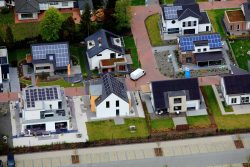 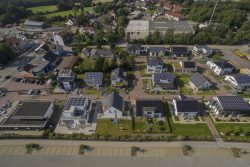 Monitoring
An initial result of the decentralised mutual power supply is that, thanks to the ring line, all the houses together had to draw around 30,000 kilowatt hours or 15 percent less electricity from the public grid in the period from mid-February 2016 to the end of May 2017 than would have been the case without the neighbourhood power grid. As a result, the public grid was relieved and 20 percent more of the energy generated in the settlement from renewable energy sources was used by the residents themselves. Calculations by Fraunhofer IBP on the cost-effectiveness of such a decentralized power supply show that the costs for a neighborhood solution are hardly higher than for comparable Efficiency House Plus buildings without connection to a ring circuit.

Furthermore, the efficiency of the heat pumps used was monitored. This is because more than 80 percent of all prefabricated houses are equipped with heat pumps (source: PM BDF 9/2018).

Construction
All houses are realized in timber construction