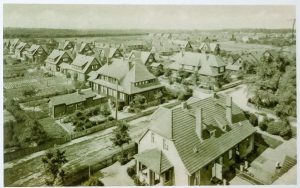 02906 Niesky: In the small Saxon town of Niesky, 20 minutes by train from Görlitz, the then largest European timber construction company "Christoph & Unmack AG" (C&U) built four factory and model settlements in timber construction with a total of 317 apartments in 114 houses. Of these, approx. 100 model houses with more than 250 apartments are still well preserved as housing estates today, most of which are in their original condition and most of which are listed buildings. They were built between 1918 and 1940. 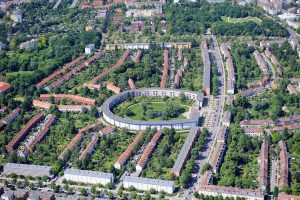 12359 Berlin-Britz: The Hufeisensiedlung is part of the large housing estate Britz with a total of 1963 apartments for about 5000 residents was built as one of the first social housing estates in Berlin. The architecture of the strongly green settlement proved to be trend-setting. The architects involved in the planning were Bruno Taut, the city building councilor Martin Wagner and the garden architect Leberecht Migge. As a complete ensemble, the estate has been a listed building since 1986. Since 2008 it has been a Unesco World Heritage Site and since 2010 it has also been registered as a garden monument. Completion: 1933 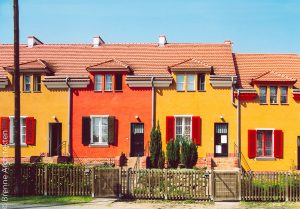 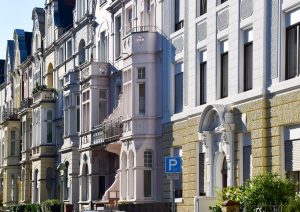 53113 Bonn: Together with the Weststadt, Bonn's Südstadt is considered the largest contiguous (and preserved) Gründerzeit quarter in Germany. Bonn-Bad Godesberg also has a large contiguous Gründerzeit quarter. Due to the mixture of uses, these quarters are regarded as the urban prototype of the "city of short distances". Furthermore, the building density helps to create inexpensive living space and reuse-friendly floor plans often allow the buildings to be used for well over 100 years. Completion: 1914 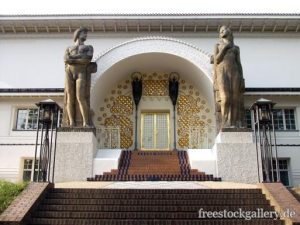 64287 Darmstadt: On the Mathildenhöhe in Darmstadt, a unique architectural ensemble consisting of buildings, landscaped gardens with sculptures, interior architecture and design was created within 16 years. Darmstadt developed into a center of Art Nouveau through the artists' colony on the Mathildenhöhe. It was founded by the Grand Duke Ernst Ludwig and the publisher Alexander Koch. During the time of its existence, 23 artists belonged to it. The work of these members and other important personalities in Darmstadt from 1898 to 1914 set the tone for subsequent developments in art and architecture far beyond the events on Mathildenhöhe. Art Nouveau, with its ornamentation and organic building forms, continues to have an influence on the design of ecological settlements or sustainable neighbourhoods to this day. Construction from 1899. Completion: 1914

16515 Oranienburg: The Edensiedlung was founded in 1893 as "Vegetarische Obstbaukolonie Eden e.G.m.b.H.". The 18 founding members aspired to "a cooperative settlement on a soil-reform basis, exclusively for vegetarians". In 1901, the statutes were amended and since then anyone who "adopts a healthy lifestyle" can become a member of the cooperative. The Eden Garden Settlement developed a multi-layered horticulture. There is to this day a policy "Ecological horticulture" and specifications for the "Ecological building and settlement".. Completion: 1914 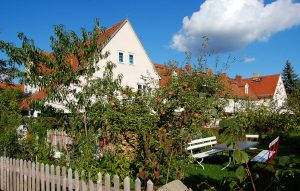 23552 Lübeck: At the time, the Aegidienhof was the largest social housing project in Schleswig-Holstein. Here, young and old, people without and with disabilities, single people and families, live and work together in a new urban mix. The architectural firm Meyer Steffens Architekten+Stadtplaner BDA carefully renovated and converted twelve different old town houses around a large common courtyard in the complex around the Aegidienhof, which is significant in terms of architectural and cultural history. The result is 65 apartments as well as 9 studios, practices, offices, workshops and a café. Completion (modernization): 2003

86152 Augsburg: For 500 years, the residents of Augsburg's Fuggerei have been paying as much cold rent as their previous tenants: 88 cents, which is equivalent to one guilder. In addition, they pay about 85 euros per month for utilities such as electricity, water and heating. The Fuggerei is considered the oldest social housing estate in the world. Completion: 1521