23552 Lübeck: At the time, the Aegidienhof was the largest social housing project in Schleswig-Holstein. Here, young and old, people without and with disabilities, single people and families, live and work together in a new urban mix. The architectural firm Meyer Steffens Architekten+Stadtplaner BDA carefully renovated and converted twelve different old town houses around a large common courtyard in the complex around the Aegidienhof, which is significant in terms of architectural and cultural history. The result is 65 apartments as well as 9 studios, practices, offices, workshops and a café. Completion (first occupancy): 1617. Completion of conversion and modernisation: 2003.

Ecology
Wherever the preservation order permitted, the renovation significantly improved the thermal insulation standard. A combined heat and power plant supplies the entire facility. About half of the houses are connected to a rainwater collection system with service water use. The inner courtyard was completely asphalted. It has been unsealed, greened, is car-free and can be used in many ways.

House 11 in Lübeck's Aegidienhof was built in 1617. After its last use as the social welfare office of the Hanseatic city, the ensemble was renovated and made fit for use as an apartment by installing new board-stack ceilings. Due to the clear ground floor room height of more than four meters, it was possible to
In addition, a gallery had to be installed in all three residential units, which was also constructed as a stacked board ceiling. After completion of the work, the owners decided against the original planning to dispense with an additional floating screed on the upper floor. Thus, the upper side of the board stack ceiling was only sanded and oiled and is also the floor surface.

Social
Elderly people or people with disabilities can get to their own four walls with the help of lifts. There are 4 wheelchair accessible and 15 barrier-free apartments. A resident with a walking disability can drive from his apartment on the second floor with his wheelchair without any barrier across the courtyard directly to the culture and district café of the Aegidienhof.

In order to permanently anchor the central aspects in the development and implementation of the housing project (co-determination, co-responsibility, co-ownership), the residents have decided on the legal form of a homeowners' association. All owners must become members of the Aegidienhof e.V.. 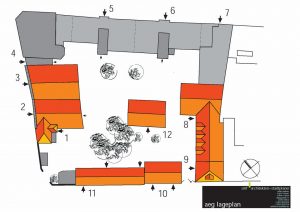 Economy/Financing
Total construction costs (conversion): € 12 million
The purchase prices of the apartments ranged from 2,000 to 2,250 euros/m². Around 80 % of the owners are owner-occupiers, the remaining purchasers are capital investors or pensioners who often wish to use the apartment themselves in old age.

At the end of 1999, citizens from Lübeck and the surrounding area joined together to form a building consortium, without the involvement of a major investor, in order to preserve a valuable piece of Lübeck's old town and bring it back to life. The former social welfare office, which had been used as an office building, was converted into 55 apartments and 9 commercial units.

Support programs
Various subsidy and loan programmes were utilised, e.g. the KfW CO2 reduction programme, supplemented by a modernisation loan from Investitionsbank, housing subsidies (rental/ownership), the modernisation programme for historically valuable residential buildings from Investitionsbank and special loans from Investitionsbank. As most of the buildings are listed, the majority of the refurbishment costs could be claimed against tax over ten years. The exemplary nature of the project made it possible to draw on further funding, totalling approx. 4.7 % of the total costs, from foundations such as the German Foundation for Monument Protection, the Possehl Foundation, Aktion Mensch, the Hertie Foundation and the Software AG Foundation. 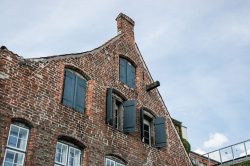 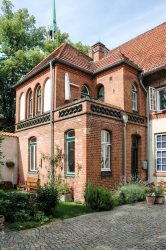 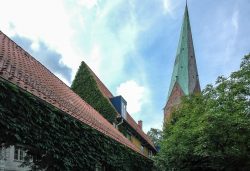 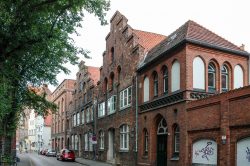 Prizes and awards
- Award in the "Neighbourhood Network" competition, sponsored by BHW and Schöner Wohnen 2006
- German Building Owner Award 2005 "High Quality-Sustainable Costs
- Prize winner in the field of modernisation, awarded by the BDA, the German Association of Cities and Towns and the Federal Association of German Housing Companies
- Recognition for the Aegidienhof at the "Lebendige Stadt" Foundation Award
- State Prize 2002 "Sustainability in Schleswig-Holstein
- Star City Competition 2002: Category Prize "Opportunities for Economic Development
- Gold medal in the competition "Living in historic city centres - future for urban centres and spaces" of the Federal Ministry of Transport, Building and Housing
- Prize winner in the national competition "New life under old roofs" of the Federation of Home and Environment in Germany (BHU), 2001
- State Prize 2001 for "Forward-looking Building in Schleswig-Holstein

Cultural Café SOFA
In spring 2018, the general meeting of the Aegidienhof e.V., together with the association "Mittendrin" Lübeck e.V., decided to found a non-profit subsidiary "Kulturcafé gGmbH" for the operation of a district meeting place / cultural café in the association's premises. The SOFA district meeting place offers a wide range of cultural and neighbourhood activities and opportunities for use, as well as a "basic gastronomic service" with breakfast, lunch and coffee.

Stay overnight at the Aegidienhof
is possible in an apartment or holiday flat
www.aegidienhof-luebeck.de/%C3%BCbernachten-im-aegidienhof 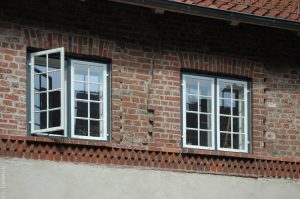