This building group project with 43 residential units, some of them as maisonettes, was realized as a timber hybrid building and exemplifies the qualities of timber construction in a dense urban context.

Storms, drought and insect infestations have caused a great deal of damage to Germany's forests over the past three years. The "International Day of Forests" on 21 March is a good time to become aware of the many services provided by the forest. 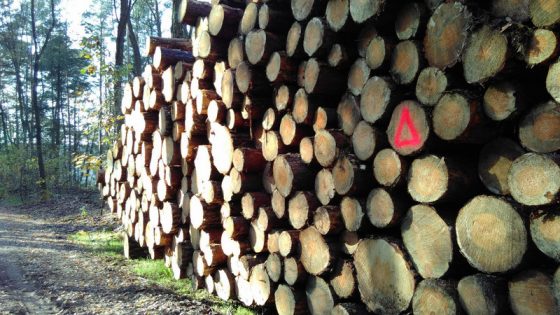 "The raw material wood is precious. It is therefore important to use it responsibly and in a way that conserves resources," warns Peter Aicher, Chairman of Holzbau Deutschland. Even if wood is affected by environmental influences or the bark beetle, it does not represent an inferior raw material, but has almost identical properties to conventional construction timber. "If the so-called 'calamity wood' has the same structural quality in terms of load-bearing capacity as conventional sawn timber, it can be used without restrictions," explains Aicher. In addition, the wood retains its important function as a CO2 sink, regardless of external impairments.

On 1 February 2021, the amendment to the Bavarian Building Code came into force. In the future, the building material wood can be used in all building classes. The legal changes make building in Bavaria easier and faster, more space-saving and more cost-effective.

In the video contribution, among other things, the Munich timber housing estate "Prince Eugene Park" and the City of Wood in Bad Aibling.

"Drought and bark beetles are taking their toll on the forest. The resulting damaged wood has caused the price of wood to plummet. The local forest owners are making a loss, even though the beetle wood is exported thousands of kilometres to China and America as construction timber. What could be the solution to the timber crisis? And could more timber construction in our country also be a way out of the climate crisis?"

Construction projects or more information on the subject:
www.faktor-x.siedlungen.eu 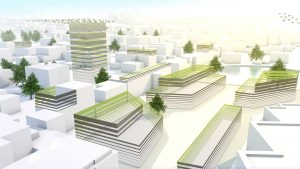 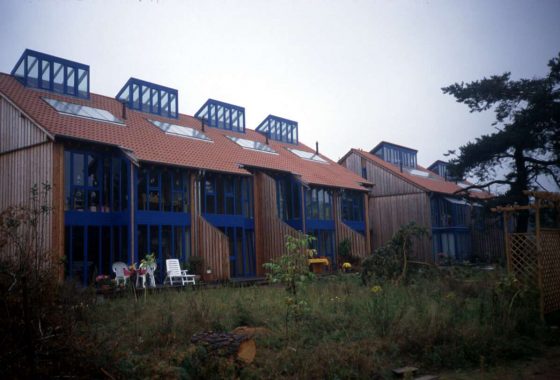 "A quarter of a century ago, Bernd Janes looked for like-minded comrades-in-arms and founded an ecologically oriented housing estate on the outskirts of Kohlhof. At first, the new neighbors were eyed critically by the surrounding community. No wonder, because the houses were built in wood, four families shared one house and the gardens were not separated from each other by fences, but merged seamlessly into each other." 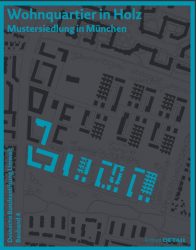 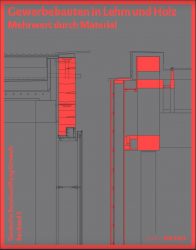 Clay and wood in commercial construction are the exception today. But why? Because it is precisely here that these ecological building materials promise many advantages. The examples presented in this publication have one thing in common: they generate enormous added value through the material used in each case. Sometimes the focus is on flexibility and prefabrication, sometimes on the indoor climate or comfort factors, sometimes on durability, user satisfaction, the CO2 balance, recyclability - and sometimes all of these together.

From 1 January 2021, climate-damaging fossil fuels will be subject to a price of 25 euros per tonne of CO2 is proven. This means that oil and diesel will become more expensive by 7.9 cents per litre, petrol by 7 cents per litre and natural gas by 0.6 cents per kilowatt hour. Citizens will be relieved of the additional costs, among other things, by a reduction in the price of electricity. The amendment, which had already been passed by the Bundestag on Thursday, also passed the Bundesrat today. The Fuel Emission Trading Act (BEHG) is designed to reduce CO2-price in the form of national certificate trading for the heating and transport sectors.

Franklin Village", one of the first large-scale socially and ecologically developed residential projects in Germany, is to be built on the "Franklin" conversion site in Mannheim. The idea is to build a quarter in timber construction that claims to be ecologically and socially sustainable. The project developers will celebrate the groundbreaking ceremony in mid-September with an artistically designed parade of diversity.

Justification
"The WIR neighbourhood in Berlin is not only characterised by its high energy efficiency (KfW 40 standard) and the use of wood as a renewable raw material for the building structure, but also by the collaborative planning process, which led to different housing concepts and the integration of different social communities. Common areas and community facilities such as a residents' workshop, swimming pool, neighbourhood square and daycare centre, facilitate a lively and diverse neighbourhood. This also includes a dementia residential community as well as sponsors for youth work and refugee groups. The five apartment buildings were built with a timber frame construction and the façade in timber panel construction. This created flexible floor plans that offer good conversion possibilities."

END_OF_DOCUMENT_TOKEN_TO_BE_REPLACED 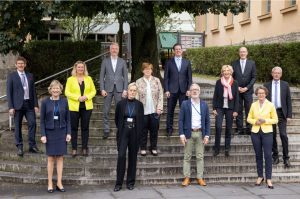 At their meeting in Weimar on 24 and 25 September, the building ministers of the federal states adopted resolutions on social housing, the use of ecological building materials and the digitalisation of the building permit procedure.

The EU's plan to become involved in the area of public housing promotion within the framework of the new "InvestEU" fund was critically assessed. The Federal Government was therefore called upon to advocate a modification of the programme so that subsidies are only granted if the provisions of regional, national or federal subsidy regimes are observed, in particular if a rent and occupancy obligation is provided for. The Chairman of the Conference of Building Ministers, Thuringia's Infrastructure Minister Benjamin-Immanuel Hoff, said: "It remains an important task to create affordable housing in Germany. The federal government must continue to provide at least the same level of funding. To make faster progress, we would need more money in the system. The EU's commitment is therefore to be welcomed in principle. But we must ensure that the money also reaches social housing, and we agree that this can best be done through the established funding programmes of the Länder." 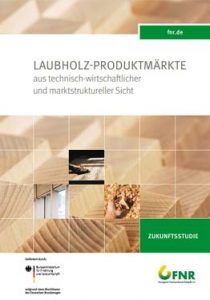 A study funded by the Federal Ministry of Agriculture determined the potential of hardwood as a substitute for coniferous wood. The results of the study are now available in a brochure published by the Fachagentur Nachwachsende Rohstoffe e. V. (FNR). There is considerable potential for hardwood to be used in industrial timber, but it cannot yet be a substitute for softwood in construction

The new version of the Bavarian Building Code will make it easier to build with wood in the future. In future, it can be used in all building classes. Schreyer: "With this, we are making wood significantly more attractive as a building material and thus making construction more sustainable." The Council of Ministers passed the amendment in its session today. Now it is the turn of the state parliament.

Among other things, Schellnhuber calls for "timely action to achieve the two-degree target, primarily by switching from fossil to renewable energy sources and replacing finite building materials with wood and renewable raw materials."

Now that almost all of the 570 apartments in Germany's largest timber housing estate in Prinz-Eugen-Park have been occupied, the Munich planning committee has recommended the implementation of the follow-up timber construction project "Kreativquartier" with 370 units.

Here are the key data:
https://sdg21.eu/db/kreativquartier 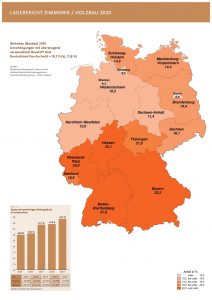 Length 1 min.
Time-lapse of the construction of the ZEB Lab in Trondheim (Norway) until April 2020

Housing construction has great potential to contribute to resource conservation. For this reason, NRW.BANK supports developers with a new additional loan under the state's housing promotion programme. Wood as a building material already contributes to climate protection during the construction of a building. This is why the Ministry of Home Affairs, Municipal Affairs, Building and Equal [...]

The Lower Saxony Timber Construction Prize has now been awarded for the third time. The aim of the state-wide competition is to strengthen the use of wood as a climate-friendly and sustainable building material, to present the current state of timber construction and to inspire future builders to build with this unique raw material. The Lower Saxony Timber Construction Award 2020 honours structures and buildings that are predominantly made of wood and wood-based materials and stand out for their high design and timber construction quality, as well as taking particular account of ecological and resource-saving aspects in the interests of sustainability.

City Planning Councillor Professor Dr. (l) Elisabeth Merk has now symbolically handed over the key to the members of the "Der Kleine Prinz" building association in Munich's Prinz Eugen Park. Their new building ensemble of atrium and point houses on Jörg-Hube-Strasse is part of the ecological model settlement there. In addition to apartments, two guest apartments, an ice cream café and a bicycle repair shop were built.

From 2022, all new public buildings must consist of at least 50 percent wood or other sustainable building material. For buildings with more than eight storeys, the supporting structure must even be made entirely of wood.

It was also decided that 90 ecological neighbourhoods and 100 urban farms should be created in Paris.

retroactive to 1 January 2020, the timber construction subsidy in Hamburg has now officially been increased to 0.80 euros per kilogram of timber product as part of the various subsidised housing construction programmes. As a funding requirement, the...

Recently, the Austrian state of Vorarlberg published the subsidy guidelines for 2020 and 2021 for residential renovation and new construction in the private and public sectors. The climate-friendly procurement of wood and wood products from the region is anchored in these guidelines. The origin of the wood must be proven by means of the "Holz von Hier" label recently introduced in Austria or comparable certificates. 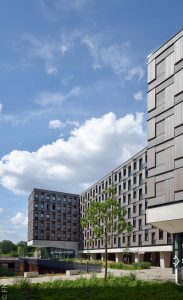 27.01.2020 A material revolution that replaces cement and steel with wood in urban construction can have double benefits for climate stabilization. This is now shown in a study by an international team of scientists. First, it can avoid greenhouse gas emissions from cement and steel production. Secondly, it can turn buildings into carbon sinks, since in the construction timber the CO2 is stored. Although the required amount of wood is theoretically available, such an expansion would require very careful sustainable forest management, the authors emphasize. 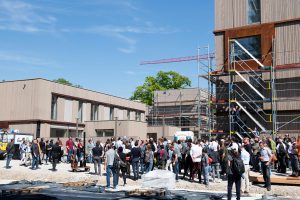 The Munich City Council's Committee for Urban Planning and Building Regulations has decided to promote the construction of new, contemporary timber construction projects. This year, the city council will develop another grant programme for construction using wood and other renewable raw materials.

The subsidy programme is suitable both for individual projects and for larger housing estates and neighbourhoods. The aim of the city administration is to ensure that around 50 percent of the buildings on municipal land are constructed using timber.

The project, initiated by the Bund für Umwelt und Naturschut 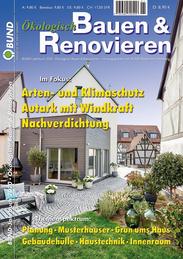 The BUND Yearbook Ecological Building & Renovation, published by BUND Deutschland (BUND), helps by making owners fit for discussions with the house bank, architect, energy consultant and craftsmen. The guidebook, which will be available from November, shows what can be done and how: Based on numerous house portraits, the annual compendium helps the reader to find out which measures, building materials and technologies are best suited to their own project.