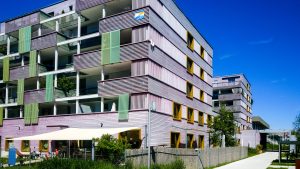 CH - Winterthur: The multi-generation house Giesserei is located in Oberwinterthur, in the city centre Neuhegi directly at the Eulachpark. It has 155 apartments with 1½ to 9 rooms, 11 joker rooms (including 3 guest rooms) and 14 commercial businesses, including a restaurant, a branch of the Winterthur City Library, two art galleries and a music centre. The 8 communal rooms include a large hall for internal and public events, 2 common rooms, 2 wash bars, a music practice room and 3 workshops. The buildings are constructed in ecological timber construction and meet the Minergie-P-Eco standard. With only 0.2 parking spaces per apartment and 480 bicycle stands, the Giesserei is considered a car-free development. Site area: 11,000 m². Completion: 2013

Only one in five households in the housing estate has a car here (Swiss average is more than one car per housing unit). Instead, the residents of the multigenerational project use public transport, car sharing (a car sharing car from Mobility in the settlement and neighbourhood car sharing) or bicycles (480 bicycle parking spaces, 390 of which are covered). Each stairwell also has a mobility room in which, for example, trailers can be stored.
As with other examples of good practice, the "Giesserei Winterthur" also has exemplary public transport connections: the residents of the Giesserei can reach two S-Bahn stations and four bus lines in less than 10 minutes on foot. Residents can find a board with the departure times of public transport on the Giesserei's website, among other places.
People suffering from electrosmog are in good hands at the Giesserei Winterthur. For this purpose, cables are laid in the floor or at least one metre away from possible sleeping areas. In addition, wishes in this regard were taken into account during the construction of the house.
In addition, on the initiative of the foundry, the adjacent streets to the settlement were converted to 20 km/h speed zones in 2015.

Around 240 adults and over 100 children and young people from more than two dozen countries of origin with roughly the same number of mother tongues live in the Giesserei. The age structure of the residents roughly corresponds to that of the Swiss population.